During research for an article I wrote on Cymatics – Sacred Geometry – DNA 1, I chanced across a fascinating sidebar of discovery. This happens regularly with me. It is as if I am drawn to certain fields of investigation so that I may understand them and then write about them. In this article, I will draw your attention to a possible cause for crop circles. 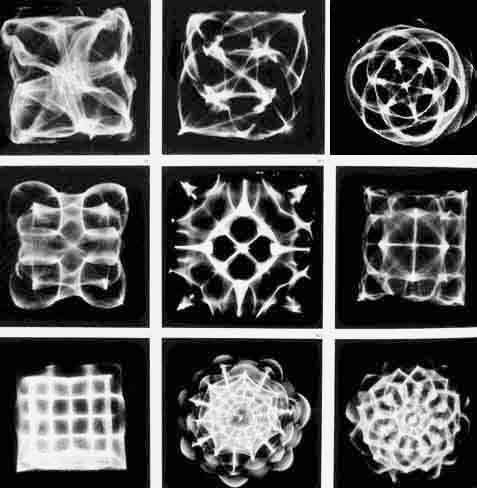 I stumbled across a number of blogs and articles which show that there is a relationship between cymatics and crop circles. One theory connects the study of cymatics to a possible means of decoding hidden messages that may be contained in crop circles. Before we get to that I will provide some background to what cymatics actually relates to. It is the study of the patterns made by certain sound frequencies pioneered by Dr Hans Jenny (b. 1904 – d. 1972)2. The word Cymatics, pronounced sigh-matt-ix, is derived from the Greek Kyma or ta kymatika which refer to matters relating to waves.

Jenny’s research showed how sound vibration could create geometric shapes of varying complexity depending on the frequency transmitted into the medium he was working with. His work may provide a physical link to crop circle creation as many of the patterns of vibration found in his photos appear to mimic their designs.

Since Jenny, researchers have shown that crop circles are primarily based on the dimensions of the Golden Mean and fractal geometry. In the book, “Alchemy of Nine Dimensions”3 written by Barbara Hand Clow, discusses the possibility that crop circles may be connected to information downloads 4. Barbara describes a vertical axis known as 10D (the tenth dimension) which connects Earth’s 1D (first dimension) Iron Core Crystal to the Galactic Central Black Hole. 10D then generates all of the other 9 dimensions that human beings can experience. Drawing on the work of Freddy Silva, “Secrets in the Fields”5, Barbara makes a connection between the spiral generated by the Golden Mean and the increasing complexity of the crop circles.

We are all taught in physics that ‘energy cannot be created or destroyed’. “The Law of Conservation of energy states that the total amount of energy in a closed system remains constant. A consequence of this law is that energy cannot be created nor destroyed. The only thing that can happen with energy in a closed system is that it can change the form, for instance, chemical energy can become thermal energy.”6

In another branch of physics, quantum mechanics, energy is defined as proportional to the time derivative of the wave function7. This brings us back to cymatics as a way of interpreting the information contained in the wave function or frequency. Jenny showed that each frequency generates its own geometric pattern and as the frequency (read wave function or energy) increases, so does the complexity of the geometric pattern formed where the wave intersects a plain containing a medium that will replicate the pattern of vibration.

Returning to “Alchemy of the Nine Dimensions”8, the assertion is that crop circles are made when a tube of light (photograph available in Silva’s book), containing billions of vibrating spirals, intersects with the earth it leaves an imprint of the spiral energy that is contained in the tube. The vibrating spirals inside the tube operate in accordance with the Golden Mean, the math ratio that determines spiral action 9. This imprint, when left in a crop, contains the frequency signatures of the energy spirals, either simple or complex.

To give further credence to the idea that sound is involved in the creation of crop circles the UK Telegraph published a story by Alastair Jamieson on 20 Oct 200910. In the article, Jamieson relates the story of a Wiltshire police officer who encountered strange beings in a field near a fresh crop circle. The article states:

“Crop circle researcher Andrew Russell, who is investigating the bizarre sighting on behalf of the officer, described the moment his sighting was made.

He said: At first he thought they were forensic officers as they were dressed in white coveralls. He stopped his car and approached the field.

The figures were all over 6ft and had blond hair. They seemed to be inspecting the crop. When he got to the edge of the field he heard what he believed to be a sound not dissimilar to static electricity.

This crackling noise seemed to be running through the field and the crop was moving gently, close to where the noise was.

He shouted to the figures who, at first, ignored him, not glancing at him. When he tried to enter the field they looked up and began running.

He said: They ran faster than any man I have ever seen. I’m no slouch but they were moving so fast. I looked away for a second and when I looked back they were gone.

I then got scared. The noise was still around but I got an uneasy feeling and headed for the car. For the rest of the day I had a pounding headache I couldn’t shift.”

The noise referred to could easily be as a result of the residual energy vibration used in forming the crop circle. Another article published in the UK Telegraph on 08 Jul 200911 closes the circle, pardon the pun, on crop circles and the Mayan calendar 2012 prediction. The article, titled “Mayan ‘apocalypse’ crop circle appears at Silbury Hill”, refers to yet another Wiltshire crop circle. The article captures the words of another crop circle researcher:

“This is one of the most interesting crop circles I have ever seen. It is definitely a Mayan symbol and we are sure it is linked to the Mayan calendar, which ends in 2012.

It appears to be a warning about the world coming to an end when the calendar does. For the ancient Maya, reaching the end of a cycle was a momentous event, so we are taking this crop circle very seriously as an indicator of a possibly huge event in 2012.”

Perhaps the science of cymatics can help us decode these crop circles and provide much-needed information on what to expect on 21 December 2012.

Leave your thoughts and comments below.